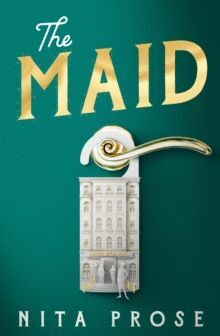 POLISHED TO PERFECTION, THE HOTLY-ANTICIPATED DEBUT, COMING JANUARY 2022RIGHTS SOLD IN 29 TERRITORIES*Film rights snapped up by Universal, with Florence Pugh set to star as the title character*'A smart, riveting, and deliciously refreshing debut' LISA JEWELLI am your maid.I know about your secrets. Your dirty laundry.But what do you know about me?Molly the maid is all alone in the world. A nobody.

She's used to being invisible in her job at the Regency Grand Hotel, plumping pillows and wiping away the grime, dust and secrets of the guests passing through. She's just a maid - why should anyone take notice? But Molly is thrown into the spotlight when she discovers an infamous guest, Mr Black, very dead in his bed. This isn't a mess that can be easily cleaned up.

And as Molly becomes embroiled in the hunt for the truth, following the clues whispering in the hallways of the Regency Grand, she discovers a power she never knew was there. She's just a maid - but what can she see that others overlook?Escapist, charming and introducing a truly original heroine, The Maid is a story about how everyone deserves to be seen. And how the truth isn't always black and white - it's found in the dirtier, grey areas in between .

. .'With The Maid comes an exciting and formidable new voice' SANTA MONTEFIORE'Elegant, warm-hearted and wry, and Molly the most winningly off-beat narrator since Eleanor Oliphant. An absolute joy' LOUISE CANDLISH'I enjoyed every minute .

. . Gripping, deftly written, and led by a truly unforgettable protagonist in Molly.

I'm recommending it to everyone I know' EMMA STONEX'Beautiful writing, an intriguing mystery, and a colourful cast of friends and sleuths ensure The Maid sparkles with wit and tension' LUCY CLARKE'Nita Prose has created a true 21st century heroine in a brilliantly written, transformative story' JANICE HALLETT'Fresh, fiendish and darkly beguiling. The Maid is so thrillingly original, and clever, and joyous. I just adored every page' CHRIS WHITAKER*PRE-ORDER NOW*